When the Yellowtail are schooled up over structure or pushing bait on the surface, the Big Hammers are absolutely deadly.  I was fortunate enough to get the chance to go on a long range trip a couple of years ago in December and on our return leg we stopped on a rock to the south of Punta Baja in about 150 feet of water that was thick with yellows.  I put a 6.5” Green Hitch Big Hammer on a 6 ounce Mula and dropped down between 2 other fishermen who were dropper looping sardines.  My Big Hammer never made it to the bottom and I was hooked up before they could get their baits to depth.  10 minutes later the deckhand put a gaff in the fish and I snapped a picture and they put him in the kill box and I was back in position.  On the second drop, my Big Hammer never made it to the bottom AGAIN.  10 more minutes: stick, click, thunk and back to the rail.  On my third drop…..  I think you are getting the picture!  By the time I had boated my sixth Yellowtail in 6 drops, the other guys on the rail had taken notice and I took a break to hand out a few rigged Big Hammers in different colors.  Plenty of guys on the boat caught plenty of Yellowtails that day but the effectiveness and consistency of the Big Hammers and 6 ounce Mulas definitely opened some eyes 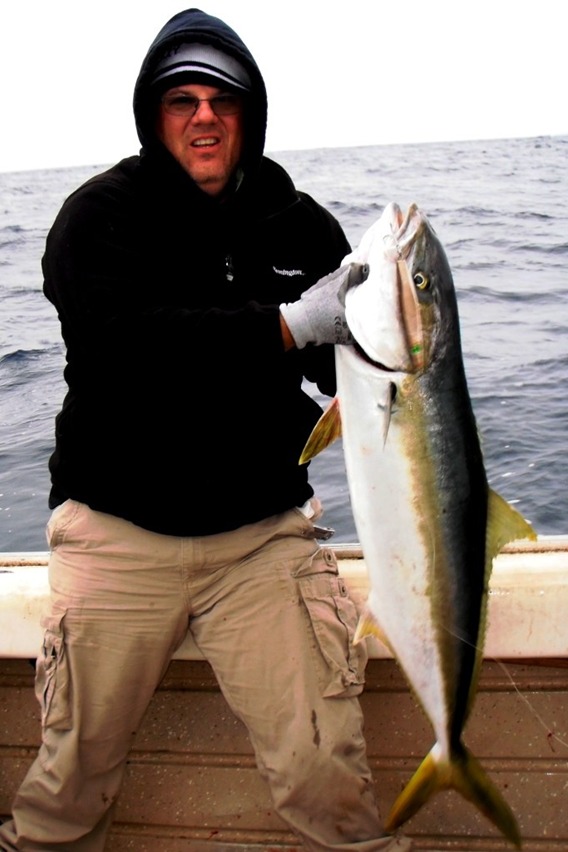 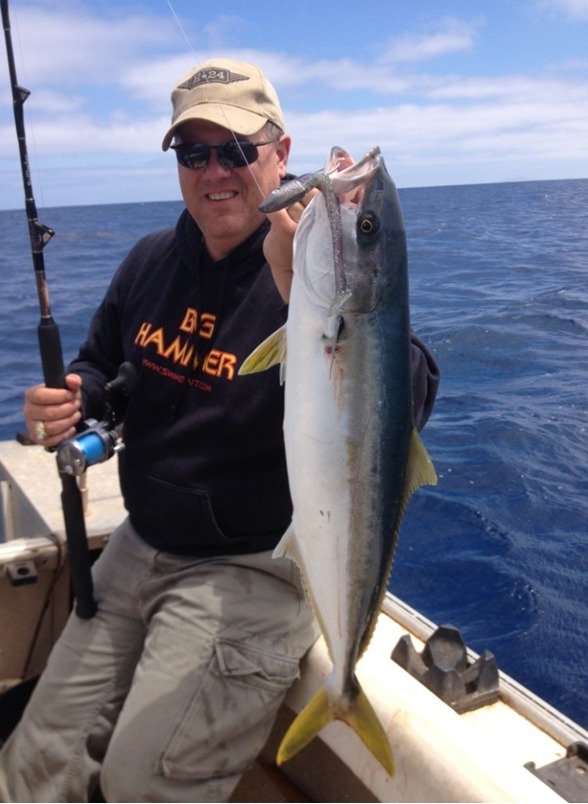 Trolling the Big Hammers is another very effective method for catching Yellowtail.  If the fish are on the surface or suspended near the surface, we will put out a spread of Big Hammers on 6 and 8 ounce Mulas.  They can be trolled at speeds in excess of 10 mph but usually we pull them at 5 or 6 mph about 70 – 100 feet behind the boat.  When the bait is stacked up on top of the 240 rock, this is a great way to get multiple hook-ups and often times the Big Hammers that did not get hit initially will be picked up on the retrieve as the hooked fish are being battled.  We found fast trolling with the Big Hammers to be very effective offshore as well.  We have experimented with “high speed” trolling for Tuna at 8 - 12 mph and picked up Yellowtail in addition to Bluefin Tuna and Yellofin Tuna.  We will definitely be expanding on that technique next season!  One of our BadDonkey secrets is the use of downriggers when the fish are holding deep.  The downriggers can be dropped to 50, 75, or 100 feet which offers the ability to cover the mid-water area that diving baits cannot reach while covering a lot of water quickly which is not possible with yo-yo irons or baitfishing. Trolling speed is limited to 3 – 5 mph due to the resistance of the downrigger ball and the resulting angle in the line as the speed increases, but we catch Yellowtail this way.  The main drawback to this style of fishing is the amount of work and coordination required to run the downriggers and clear the lines when a fish is hooked.  We don’t use this method often, but it allows us to put fish in the boat on days when other methods fail to produce 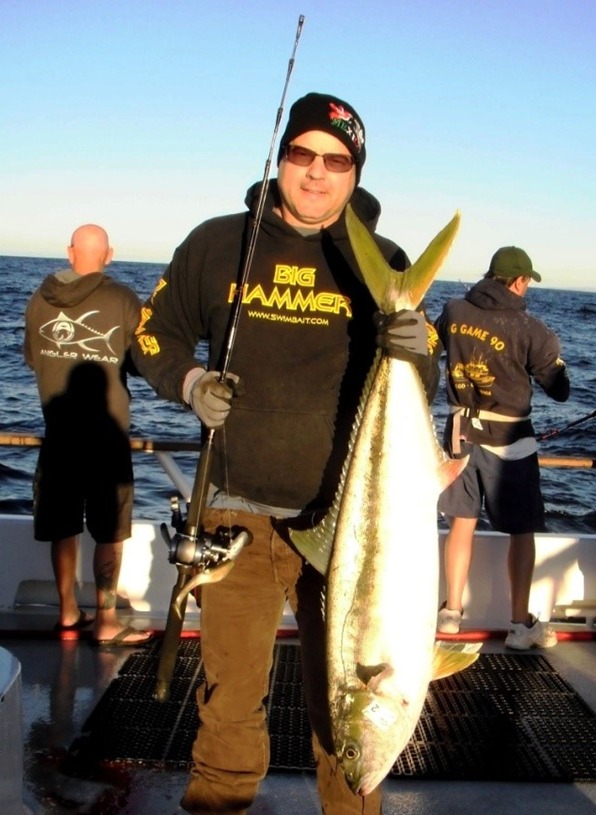 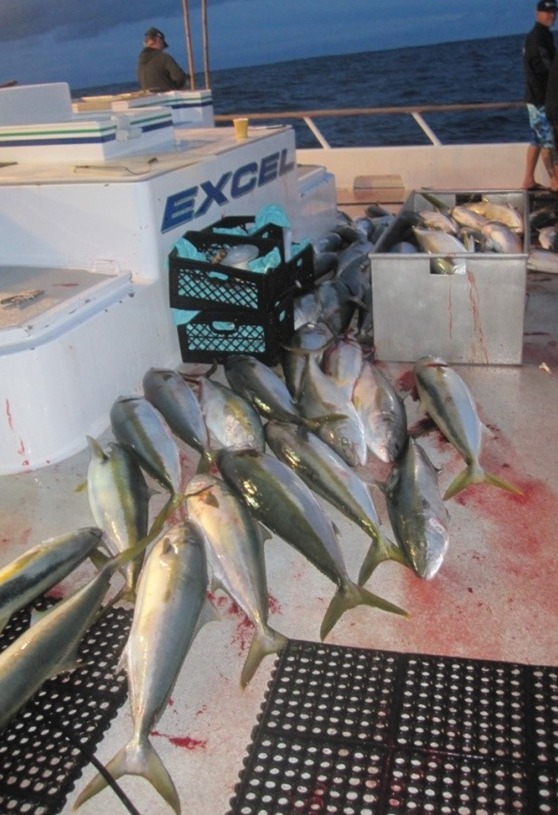 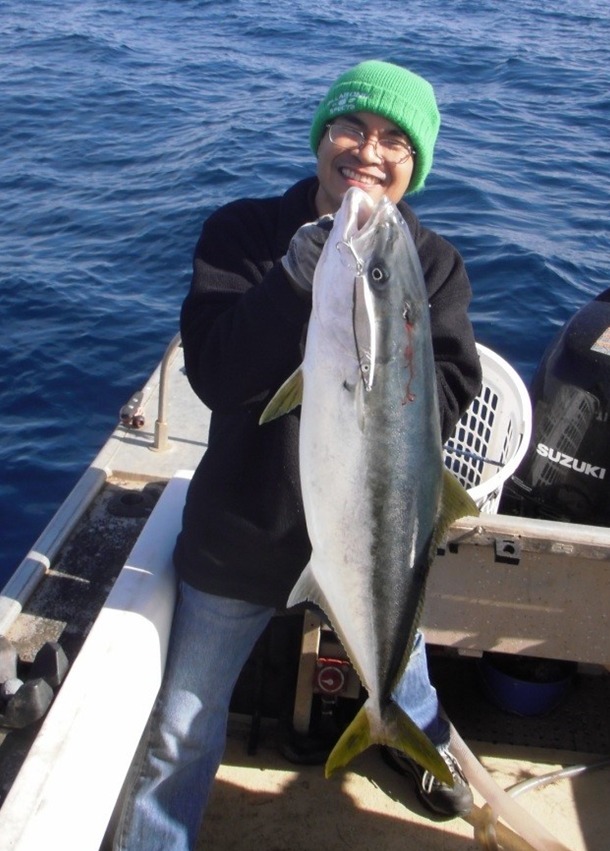 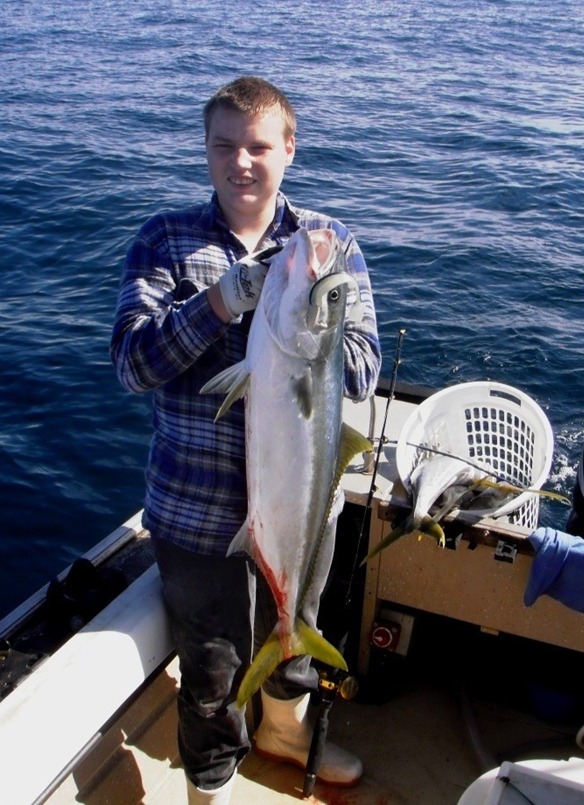 I have had equally good luck fishing Yellowtail with BadDonkey jigs and Big Hammers though I use them under different conditions. I like using the BadDonkey jigs when the Yellowtail are scattered or deep.  The 9 ounce BadDonkeys get down deep fast and the Yellows seem to like them equally well on a fast retrieve or fluttering down on the free fall.  One of the best days of fishing I have had for Yellowtail was an overcast  morning in June on the east side of San Martin Island.  The Yellows were roving in large packs just off the sandy bottom in 90 feet of water and they wanted the jigs right on the bottom.  We would let the BadDonkeys lay down on the bottom and then rip them up quickly and then let them freefall back down.  The Yellows were slamming the jigs on the fall and over a 2 hour period we boated 7 and farmed several others.  The yellows scattered after that but we were able to cruise around and find them suspended in small groups and we were able to pick them off one and two at a time for another hour. On several occasions we have caught Yellows on the yo-yo at the high spots.  This is particularly productive in the late fall and early spring for the big homeguard Yellows.  I ply the deep water humps around the 6 fathom spot or the 240 rock in the afternoon.  My favorite colors for Yellowtail are white with a brown back and brown spots (market squid), dark green with a black back and white belly, and scrambled egg.  This method of fishing is extremely exciting since you are concentrating on reeling quickly and when the Yellows hit, it is abrupt and violent and you are left with no doubts that something has grabbed your jig.  The rod doubles over, the drag starts pulsing and it is GAME ON!  I use a stiff 6-foot rod and 40 pound leader and keep the drag locked down for this style of fishing to attempt to keep the fish out of the rocks; it generally works about 2/3 of the time.  Recently we have started fishing heavier drags and putting our backs into the fight when we hook up a Yellow in this way and our catch ratio has increased dramatically but, buddy, you KNOW you got something on the other end of the line .  Not sure if it is the type of leader material I am buying now or just the fact that I have been replacing my leader material a lot more often but we have not been breaking off fish.  We have also learned a lot about how to properly tie flouro leader onto braid.  The break-offs we do have often occur in the braid which seems very sensitive to any kind of abrasion.  Over a few seasons of trial and error, I have settled on 65 pound Izorline or Jerry Brown Line One braid and 40 pound Yozuri pink flouro.  You need to eat your Wheaties for this style of fishing