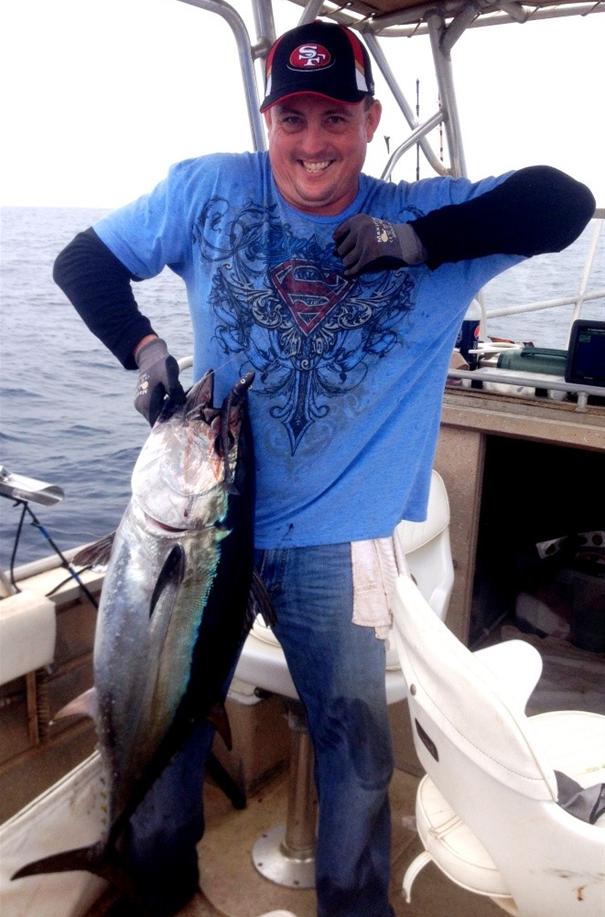 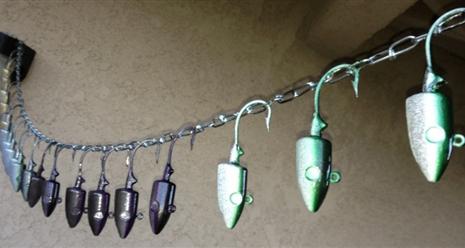 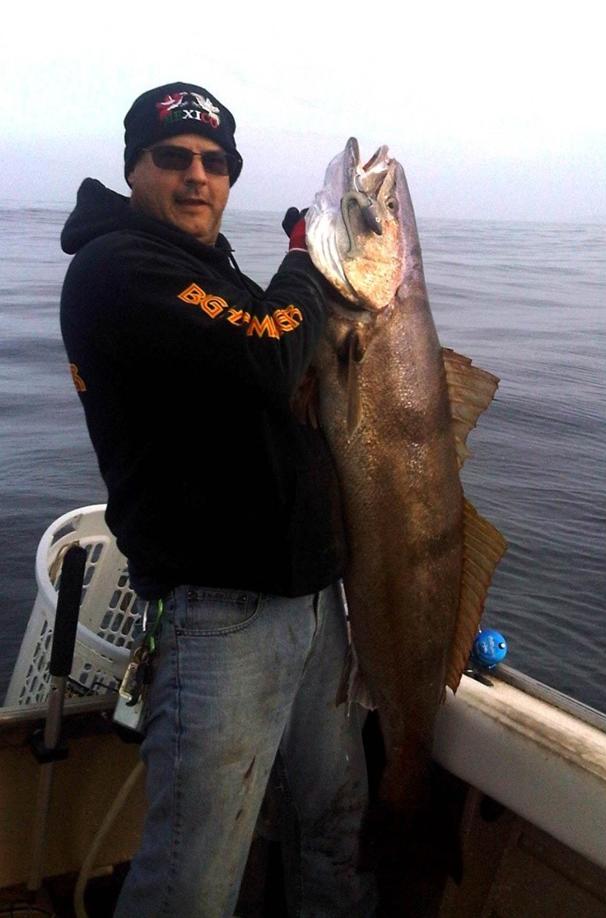 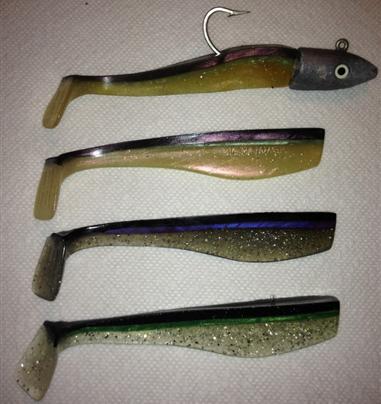 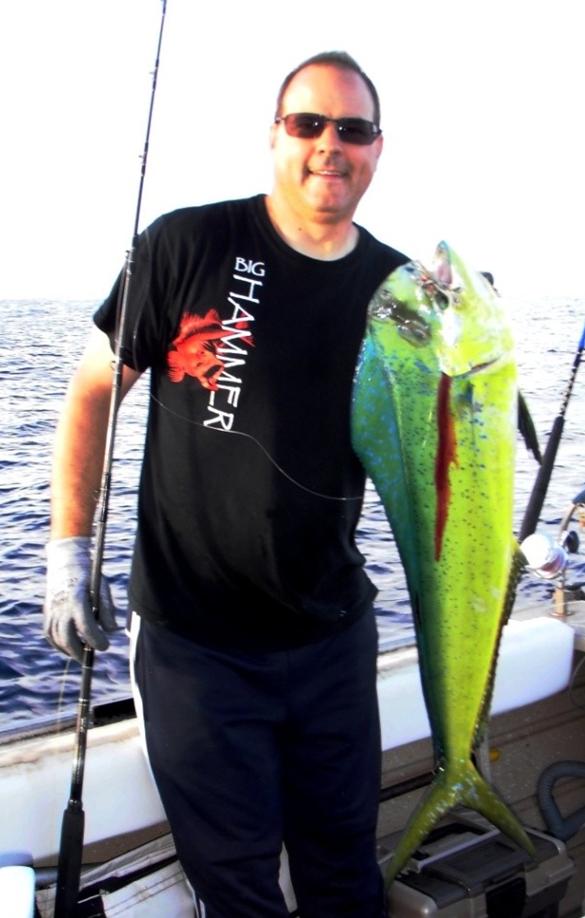 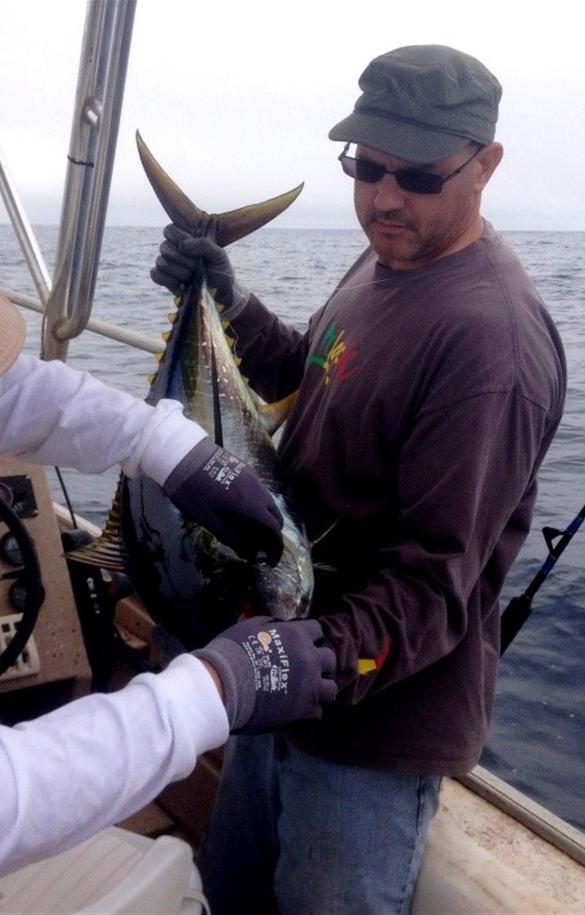 My passion is halibut fishing and I began experimenting with swimbaits as an alternative to live bait and quickly adopted Big Hammer swimbaits as my weapon of choice.  Even with a slow retrieve that big, flat, paddle tail moves enticingly back and forth like a sexy, salacious chica and apparently this action is irresistible to the butts.  I chose the Bleeding Mackeral color, since renamed Bleeding Trout to appeal to the freshies, because I liked the combination of the dark green back and glittery white belly with the touch of red.  It seemed like the perfect representation of a sardine or mackerel that had been injured and had just enough life to hop along the bottom in the throes of death.  Whether I had made a wise decision or had just gotten lucky, this combination worked and we started Hammering the butts in the bay.  The only issue I was having with the Big Hammers was the lack of availability of a good, heavy head that could get the swimbaits to the bottom and keep them there. I believe that the Big Hammers were originally designed with kelp bed calimako Bass fishing in mind and, as such, the heaviest swimbait-specific heads produced are only about 3 ounces.  I had found 4 ounce heads that could be modified with a bit of shaving and filing but even in 30 feet of water with a mild current it is difficult to maintain contact with the bottom. There are 6 ounce and 8 ounce and even heavier heads available, but these are designed for scampi style grub bodies and they either have no shank, which allows the swimbait to spin on the hook, or the shank is so thick that it splits the swimbaits like a piece of cheese.   In addition, the bigger heads are shaped like a bulging beer can and just have no resemblance to the head of a natural bait.  It did not take much filing and shaving of the thick shanks to convince me that there had to be a better way.  I started doing some research online and found a set of striper jig molds that I was convinced I could modify to work for what I had in mind. When the molds arrived, I broke out the dremel tool and went to work.  My first results were not pretty but, WOW!! They were amazing!  We fished the 6 ounce heads in 100 - 150 feet of water just off the beach at Arroyo Hondo, 12 miles south of Bahia San Quintin and we limited out on deep hanging calimako bass in less than 2 hours for the three of us on our first field test.  It is the first trip that I can remember having to figure out what species to go fish for next because we had limited out so quickly.  JACKPOT!!  And so began the evolution of the Mulita swimbait heads and my relationship with Big Hammer

I met Pete Wolf of Big Hammer at the Fred Hall Show in Long Beach in 2009. I showed him some of my heads and told him about the success we had been having with the butts and bass and he spent time with us discussion colors and how other fishermen were using the swimbaits.  I think the heads were an alien concept to Pete at the time but he was patient with me and gave me his contact information and even gave us a couple of Big Hammer shirts. I started copying Pete on my fishing reports that I post on Bloody Decks and hitting him up for information on how to fish different species and debating color choices.  Initially, I started buying cases of the discontinued colors from the Big Hammer website (www.swimbait.com) and then I would give Pete feedback on how they worked; usually prodding him about how they could discontinue such a great color after I would go out and Hammer the crap out of the lings and bass. One of the colors that was destined for the cutting table was Bleeding Mackerel and I poured the grief onto Pete but, in the end,  the color was saved by the freshies who took notice of the color's resemblance to a rainbow trout. Hence, the Bleeding Mackerel was resurrected as the Bleeding Trout and is still available today.   One of the colors that did make the chopping block was called Silver Chovy.  The Silver Chovy has a rich metallic blue back with a light green side stripe and a clear metallic flake belly.  After using this color for a season, I purchased everything Pete had left on his shelves and then pleaded with him to bring the color back.  I still have a couple of cases of 5.5" baits in this color but I am down to 6 of the 6.5" baits and have found a substitute in the Mackerel color.  Mackerel has a jet black back and a dark, metallic green side stripe with a clear belly full of large metallic flakes.  Blues and greens penetrate well through the water column and the black back provides good contrast.  The large metal flakes provide plenty of flash in clear water and these are my go-to baits for late season clear water or surface casting for yellows.  My favorite color for fishing sandy or stained water is called Green Hitch.  This configuration has a metallic purplish hue to the back with a green side strip and a cream colored metallic fleck body.  This is my go-to color for fishing butts in Bahia San Quintin and green water fishing for white seabass.  Last season I got some Deep Purple swimbaits for trolling tuna.  These have a black back, metallic purple side stripe, and a smoky metallic fleck belly.  We troll them for tuna offshore at 9 - 10 mph and the Bluefin and Yellowfin definitely like them.  I was surprised to find, however, that EVERYTHING likes the Deep Purple.  We catch yellowtail, bass,  black seabass, halibut and ling cod with the Deep Purple. We have found the Deep Purple to be DEVASTATING on ling cod and it is quickly becoming my go-to primary color.