As we began using the flutter jigs more and more we found that just about everything that swims in the waters around San Quintin will eat them: Ling Cod, Rockfish, Yellowtail, Calimakos, Sandys, Sheephead, and the occasional Whitefish or White Seabass and Halibut.  We adopted the jis as our go-to bait and began referring to them as BadDonkey jigs because they definitely KICK ASS when it comes to putting fish on the deck.  The largest fish we have put on the deck with a BadDonkey jig slammed a 9 ounce scrambled egg in only 35 feet of water; a 64 pound White Seabass that my good friend Peter Agostino caught in 2012 in Bahia San Quintin.  Peter could not seem to put a fish in the boat on that trip; the fish would break off or he would get them to the surface and they would spit the hook and Peter would  burst into  a blur of turrets and saliva.  Finally, on the last hour of the last day Peter was using the big flutter jig in the shallow bay as we were drifting for butts.  I was just about to tell him to quit wasting time and switch over to a Big Hammer when his rod doubled over and line began peeling off the reel.  Lesson learned!  His catch earned him the nickname "Big Whitey" which ironically fits his stature as well as this accomplishment.

We began experimenting with different colors and color combinations from the standard blue and white to exotic reds and pinks.  We found that our best producing colors for Ling Cod and Yellowtail are dark green with a black back and white belly and a brown and white speckled pattern that perhaps resembles a squid.  Oddly, we never seemed to do well on the blue and white or silver colored jigs which were standard commercial jigs in my box previously.  The Calimako and Sandbass seem to be colorblind and will hit any color of the jigs with equal enthusiasm. If the bass are suspended, the jigs rarely reach the bottom and often times we will lose one fish and immediately hook another..... and another.   On one trip one of my fishing partners opened our eyes one day to the BadDonkey cracker combination.  While fishing an underwarter step north of San Martin Island at San Ramon we catch a lot of croakers on the fringes of the step.  We know we have drifted off the fertile areas when the croakers start coming aboard and then it is time to run up for another drift.  At one point we repositioned the boat for a drift and my friend dropped his jig down with an 8" croaker hanging helplessly from the big treble hook. I shook my head and went back to fishing and about that time his rod doubled over and he pulled one of the biggest Sandys I have ever seen up into the boat; easily 9 - 10 pounds.  The next time we drifted onto the flats, he  put several croakers into the bait tank and then proceeded to teach us that there is no such thing as too big a bait in San Quintin as he pulled in several BIG Sand Bass on the combination.

Since those early days we have gotten reports from our customers that have used the BadDonkey flutter jigs in BOLA, norther California, Washington, and even Hawaii  with excellent results.

My first "breakthrough" in the quest for a live bait alternative was heavy butterfly jigs. Standard irons did not sink deep quickly enough but the heavy butterfly jigs did the trick on Ling Cod.  We quickly learned, however, that the twin harness hooks mounted on the front of the baits were a BAD idea for Ling Cod fishing . The front mounted hooks put the monofilament line at the mercy of the Ling Cods' teeth and at $15 - $20 per jig it did not take many bite-offs for this method to become unacceptable. I had been making my own torpedo and ball weights for a few years and decided to look for an alternative to the expensive, commercially available butterfly jigs.  With a little bit of web browsing I was able to locate a likely solution from a company called Do-It that produced a mold for 7 and 9 ounce flutter jigs.  Our first outing using these flutter jigs in San Quintin, Mexico was OUTSTANDING! The 7 ounce jigs worked excellent for dropping on the high spots on the 240 ridge, the 15 spot, and the 6 fathom spots and the Ling Cod and Rockfish hit them with reckless abandon.  The big 9 ounce jigs reached depths of 300 feet with ease and little tide drift.  One of the benefits we noticed immediately was that our catch ratio on the Ling Cod improved significantly versus bait fishing.  With bait, we were lucky to get 1 out of 3 or 1 out of 4 Lings to the boat unless we tied on stinger trebles and hooked them through the backs of the mackerel. This, however, was time consuming and it was a challenge to get a treble solidly into the back of a squirming mackerel without injuring the bait or winding up with a nose hook in your hand.  With the flutter jigs, the lings came into the boat with that big treble hook impaled solidly into the roof or corner of their mouths and our catch ratio jumped to 80% - 90%.  With a bit of experimentation, we found that dropping the jigs to the bottom and then reeling them up quickly  6 to 8 turns and dropping them again was DEADLY.  Most of the time the lings will grab the jigs on the drop or they hit them 2 or 3 cranks up from the bottom.  The Rockfish, on the other hand, seem to like a lazy lift and drop method.  One pleasant surprise was how effective the jigs are on Yellowtail.  With a yo-yo retrieve using a medium to fast retrieve speed, the yellows SMASH them. I like using the 9 ounce jigs for yellowtail because the jigs drop quickly and respond well to a rapid lift and drop rhythm. 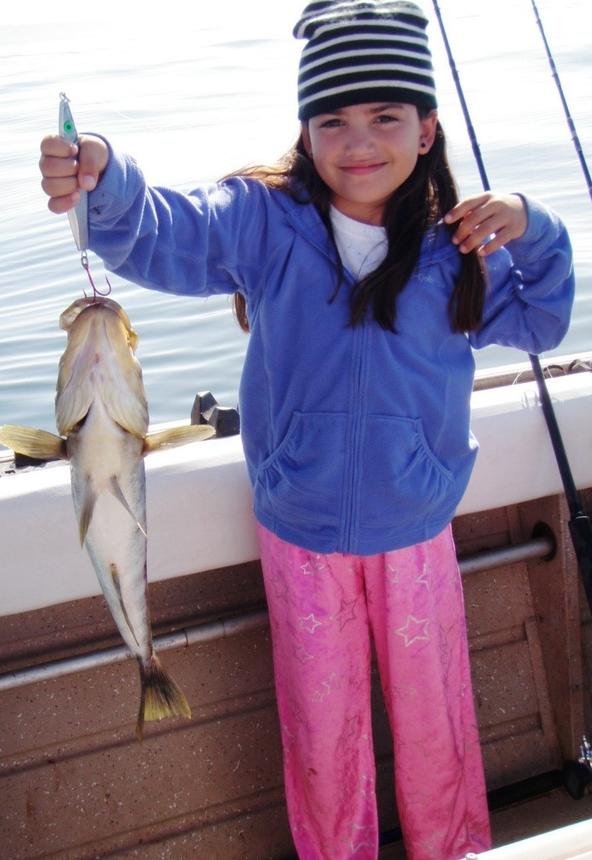 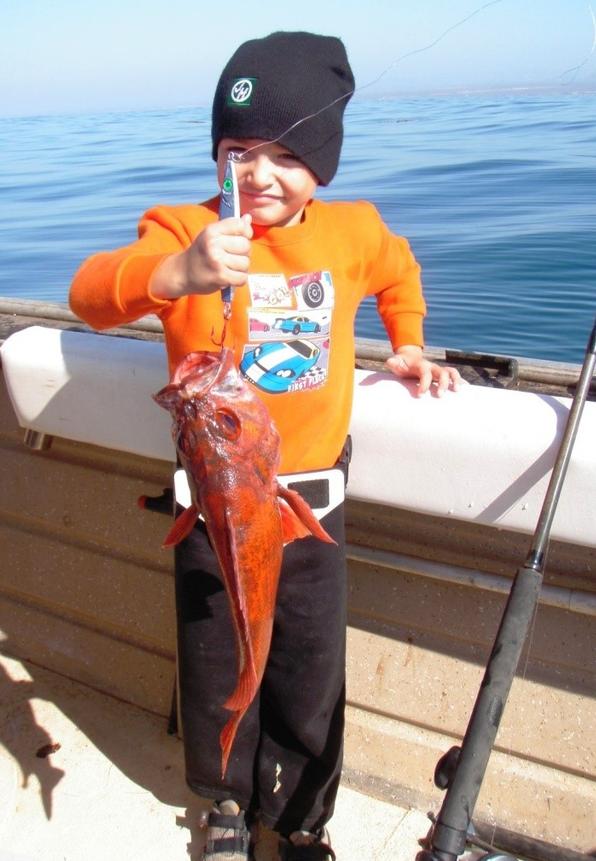 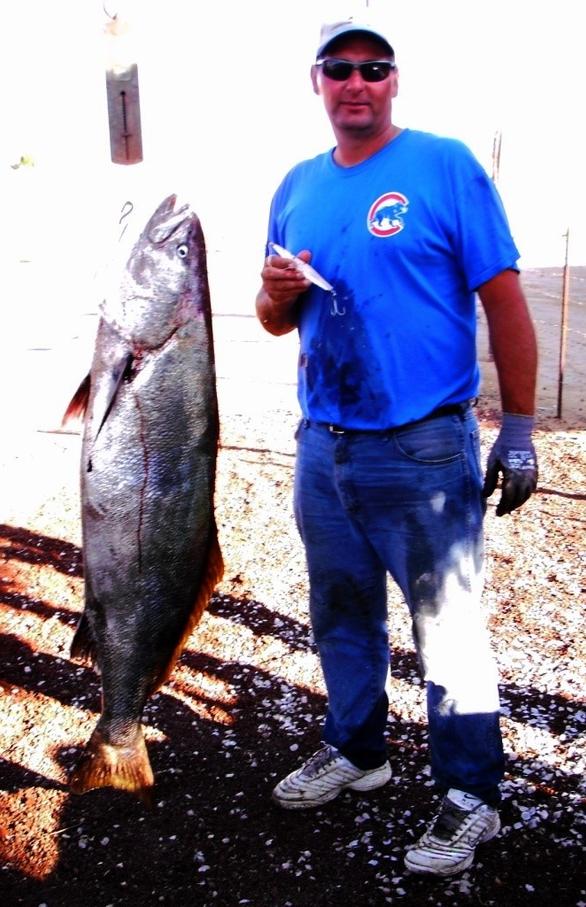 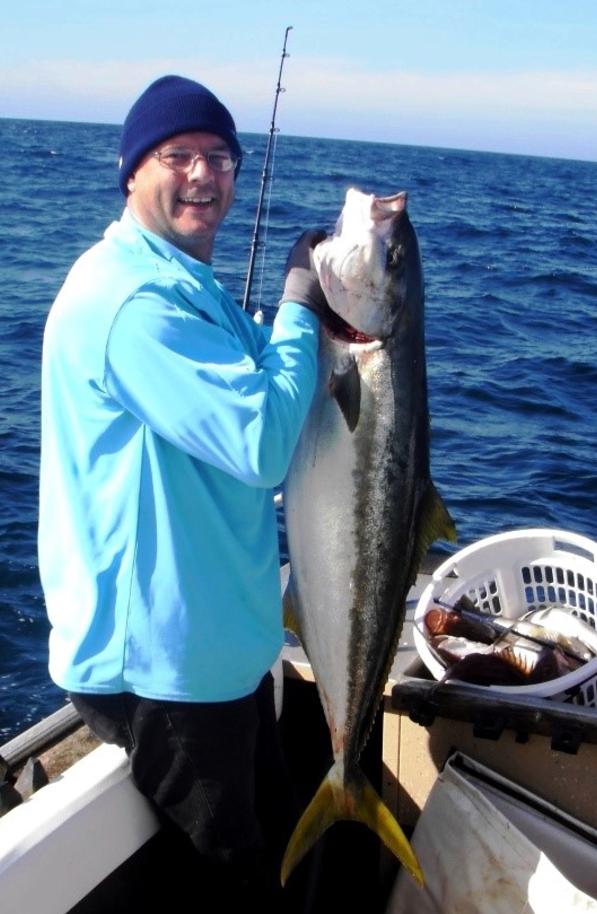 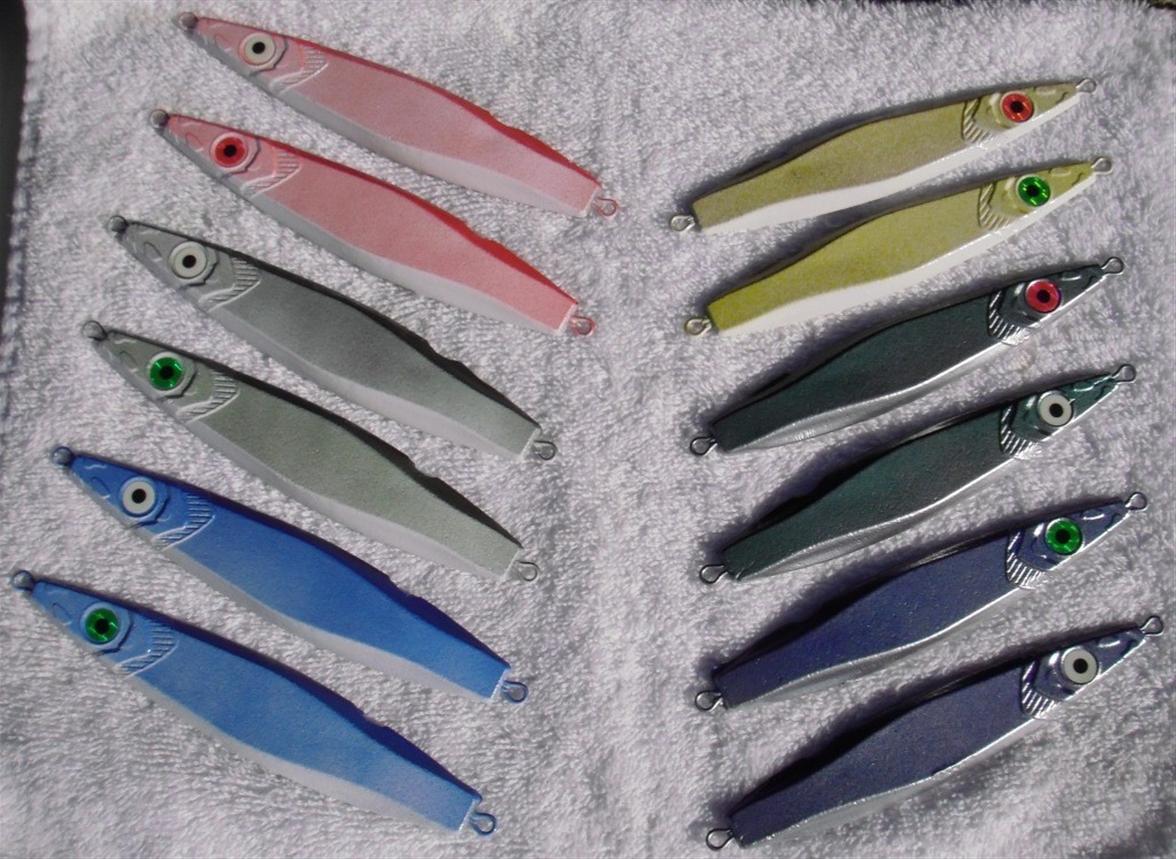